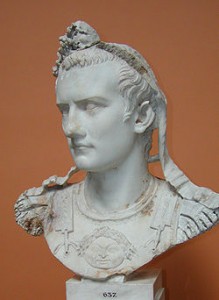 He was a person of nobility who became famed for his righteousness. He would be the last great king to rule over the Jewish people, someone mentioned almost universally with favor in the Talmud. Indeed, there will be a period of almost 45 years when it will look like Jewish life in Judea will turn the corner for the good. It will be a time when both government and religion work in harmony and for the good of the people.

As per the Roman custom with the children of foreign leaders of lands they controlled, Agrippas was sent to Rome and raised there. By holding the children of the king hostage, the Romans hoped to thereby deter him from rebelling. When in Rome, Agrippas was raised in the household of Augustus Caesar, and later the Emperor Tiberius. He became friends with the emperor’s nephews, including the future emperors Caligula and Claudius. He was educated with them, played with them and was considered part of their circle.

At the death of Tiberius, Caligula became emperor of Rome. In the power struggle to become emperor, Caligula killed the nephews who stood in his path. This was common practice in the brutal world of Roman politics. Poison was often the favored method of assassination. Indeed, there was a whole industry of professional poisoners.

Caligula was a certified madman, the epitome of lunacy seated on a throne, although it was by no means the first time that a raving lunatic became the emperor. Among his many acts, Caligula appointed a horse to the Roman senate — although if one knew the Roman senate perhaps that was not so insane.

Rome was subjected to a reign of terror. Caligula had thousands killed. He reverted back to primitive Roman paganism. Even through the Romans were officially pagan, the leaders had become less zealous about it. They did not believe in a lot of the nonsense any longer. Nevertheless, Caligula not only believed in it but had himself elected as a god. Among the advantages in his mind was that no matter what he did he would not suffer the consequences in the Roman afterlife. He had statues of himself erected wherever he could, and people had to worship his image like that of the classic gods. He had dreams of becoming a permanent god on the order of Apollo, Zeus, etc.

He decreed that his statue be erected in the Temple in Jerusalem and that the Jews worship it. This is what had touched off the revolt of the Hasmoneans two centuries earlier. It was an act that guaranteed to ignite a rebellion in Judea against Rome.

However, Agrippas interceded. He knew him from his days growing up in Rome. As mad a Caligula was, he heard Agrippas’s arguments and withdrew the order. The only place in the Roman world where the statue of Caligula did not appear was in Jerusalem.

Eventually, the Romans had enough of Caligula, and his own soldiers, the Praetorian Guard, assassinated him.

The Holiness of the Sdei Chemed

Sdei Chemed: An Encyclopedia Before Its Time

The Chief Rabbi of Crimea