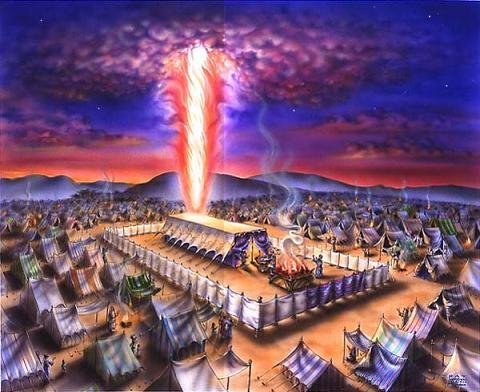 Let them make Me a sanctuary that I may dwell among them. (Exodus 25:8)

The exact year of the destruction of the Temple is somewhat up to debate, but most historians agree that it took place in 586 BCE. In the spring of that year, Nebuchadnezzar came from the north and invaded the outskirts of Judea. By the early part of the summer his army had encamped around Jerusalem.

Within a month they had destroyed all pockets of Judean resistance. Tens of thousands died in the siege, which brought on famine and pestilence, and then by sword and fire. Those who could do so fled. However, the Babylonians had anticipated that and were expert at herding escapees into giant slave camps, from where they were transported into exile in Babylon.

At sunset at the beginning of the ninth day of the Hebrew month of Av the Babylonians set fire to the Temple, which was made primarily of stone, marble and similar substances, and should not have burned easily. Apparently, the accelerant used to set the fire made the stone so hot that even it burned. The building collapsed in the fire and burned the entire day of the ninth as well.

Despite that, even in the land of their enemies the Jewish people were able to realize that the Temple could be rebuilt — if not in brick and stone, then in a spiritual sense through spiritual work.

Even though the Temple was destroyed, God could find a place in their synagogues, in their houses of study, in their behavior, in their hearts. They would be able to build a Temple of the spirit… until the time would come when God, in His own fashion, would rebuild a physical Temple.

Building a Temple of the spirit is much harder to do and a much greater accomplishment. It is much easier to build a building than what is inside the building. The modern world has some of the finest school buildings ever to exist, with all the modern accoutrements to educate the masses, but it is very hard to produce one human being. There are beautiful houses of worship all over the world that are glorious to behold, but it is hard to build a place where God is really welcomed and would want to be found, so to speak.

The Jewish people, to their everlasting credit, have been able to build miniature sanctuaries (Ezekiel 11:16) in different communities over the centuries in different continents. Although the physical Temple was destroyed the central idea behind it remained and took on greater meaning. It gave the Jewish people strength, courage and purpose. It spelled the difference between general history and Jewish history. No other people have sustained such a blow and not only survived to tell about it but have been able to carry on with their mission.

That is why the destruction of the First Temple has to be seen as the watershed in Jewish history. Nothing was the same afterwards. On the other hand, it created new opportunities to work on the inner dimension that had been neglected by so many. They took the lessons to heart, rolled up their sleeves and got down to the business of self-improvement and rebuilding from the inside out.

In the final analysis, the way the Jewish people ultimately reacted to the tragedy represented a triumph of the spirit. The outer loss created inner opportunities that they took advantage of to guarantee not only their survival and continuity, but their eternity.