“Poems are made by fools like me, but only God can make a tree,” wrote Joyce Kilmer, famed British poet who was killed in action in World War I. More than perhaps any other form of nature, the connection of trees to the Creator appears throughout Torah, Talmud, and later Jewish thought. Eternal life and knowledge are represented in the Garden of Eden in the form of trees. The wanton destruction of trees by man is expressly forbidden by Jewish law. In fact, the human race itself is described in the Torah as being a tree: “For humans are as the tree of the field.” (Deut. 20:19)

All later Jewish thought and practice has been influenced by this use of trees as the metaphor for human life in the Bible and Talmud. Trees, therefore, bear study and contemplation. They can aid us in our never-ending search for ourselves and our destiny. So here are a few thoughts for us wooden-headed humans.

A number of years ago, my wife and I were able to spend a few days in Yosemite National Park. Among the awesome wonders of nature that can be viewed there is a famous grove of sequoia trees. They are the oldest living things on our planet, some of them already being thousands of years old. They are massive in height and girth. If anyone needs a lesson in humility, standing in the midst of that sequoia tree grove in Yosemite will do nicely.

As the park ranger explained their growth and nature, and as the immensity of the trees gradually overwhelmed the visitors, a tremendous hush and palpable silence filled the air of the sequoia grove. I thought to myself, “I am standing next to a living creation of God that was here when the Temple in Jerusalem stood on its foundation, when Rome was the colossus of the world, and when there was no London, Paris, or New York. What wonderful secrets it could tell me, if only it could speak!”

And then I realized that it was sharing with me a great secret about life merely by its presence – the secret of patience, of time, of being unhurried.

The park ranger pointed to a small bush-like tree that was about forty inches tall. “What species of tree is that?” he asked.

None of the amateur botanists dared to guess.

“Why, that is a sequoia tree,” he answered. Sensing our amazement, he added, “It is only about eighty years old. Give it time, and it will also be hundreds of feet tall like its brothers.”

Ah, time, that most precious of commodities! Fleeting, irreplaceable, and often abused. Humans are not blessed with the lifespan of the sequoia. The Psalms teach us that the years of our lives are “seventy, or by dint of courageous strength, eighty. (90:10)” Modern medicine and technology can stretch those limits, but not by much. So our nature is to be impatient and in a great hurry, realizing that our clock is constantly ticking. We want instant answers, instant gratification, and instant results because we know that there is not much time left for us. Yet it is patience – the ability to allow time to work its magic, its healing, and its eventual accomplishments – that truly encourages and defines human progress.

The question the sequoia poses to us is, “What will our world and our efforts in it look like one or two or five centuries from now?” The God of history has infinite patience to wait for the reply. We can only imitate Him in attempting to achieve the blessing of at least some sense of patience in our personal, hurried lives.

In the Ethics of the Fathers 3:22, we are taught that there are two types of trees that represent two types of humans. Some grow very tall and give the appearance of eternal mightiness, but have a very shallow root system. These trees are subject to being destroyed in a major windstorm. Their shallow roots do not have the leverage to hold them against fierce winds. However, other trees have a very strong and developed root structure. Those are the ones that will ride out the storm without being uprooted.

So too, the Rabbis taught us, it is with human beings. Someone who is deeply rooted in the faith, traditions, and lifestyle values that have defined civilization since Sinai will be able to withstand all of the hostile storms that challenge all good people in their lives. The strength of family and of home, of secure and positive relationships, of Godly values untainted by human corruption and cynicism are all means for planting our roots deep into the ground. 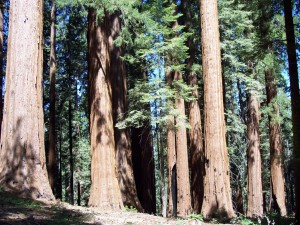 Having lived in both Miami Beach and New York, I have had the dubious honor of experiencing a number of direct hits to my home and property from hurricanes. The almost human shriek of winds in excess of 125 miles per hour can pierced your innermost soul. In one such hurricane, two large trees in my backyard were felled, one of which, unfortunately, landed on my neighbor’s house. The tree surgeons arrived to remove the trees and in that process, sawed them back nearly to the base of their trunks. However, the root systems of both trees were apparently unaffected. Soon, new branches began to grow out of the sides of those shortened trunks. Over the years, those branches grew so tall and healthy that in spring and summer, the trees were clothed in verdant beauty and provided blessed shade. Unless you looked very closely, you could not tell that they had sprung up from truncated stumps that had once been declared “dead.” Yet there they were – beautiful, alive, and fresh as ever – due to the life force of their root systems and the amazing Divine power of regeneration that the Creator has infused into all His living creatures.

To me, those trees symbolized the recuperative power of humans in the face of all adversities. The unconquerable spirit of humans is the highest reflection of the Godly soul within us. The Jewish response to tragedy, both personal and national, has been to go on and rebuild, regenerate, and reproduce. Is that not really the story of Jewish life in the past century? The handful of great men and women who rebuilt the Torah world over the past seventy years were, in the main, Holocaust survivors. The State of Israel is a product of Jewish regenerative tenacity after the horrors of World War II. If the roots are there, the tree will yet give forth new branches and leaves.

In a letter to one of his students, who was apparently depressed about the situation of 12th century Jewry, Maimonides proposed the following metaphor: In the autumn when leaves begin to fall from the tree, every leaf that falls from the tree says, “Woe to the poor tree which will be left so barren and empty without me.” In reality, the leaf should weep for itself and not for its host tree. When the depressing and cold winter will end and the warm spring sun will return, the tree will put forth new leaves and cover itself in beauty once more. But the poor leaf is dead forever; its vitality was solely dependent upon its being attached to the tree. So too is it with Jews and the tree of life – the tree of Torah and tradition, of moral values and holy life.

Many Jews who drift away from their heritage, who remove their leaf from the tree of Jewish experience, nevertheless feel nostalgic and sorry for the tree. “How will it survive the winter when all of its leaves have deserted it?” The truth of the matter is that the Jewish people and its Torah is eternal. It is the Tree of Life itself. Our task is to see that somehow, at all costs, our leaf remains attached to that tree.

For more background on the holiday of Tu B’Shevat, please see this post.

Don’t Tread On Me

Don't Tread On Me