Don’t Tread On Me 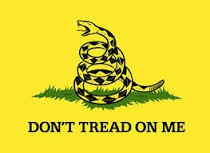 In the American Revolutionary War, General Christopher Gadsden designed the famous flag depicting a rattlesnake and the words, “Don’t Tread On Me!” The symbol of the rattlesnake dated back as far as 1751 when Benjamin Franklin sardonically wrote that since the British were sending convicts to the colonies, the colonists should send rattlesnakes, which were native to America, over to England. Both the flag and the phrase have been appropriated in many contexts – from the Tea Party movement to rock ‘n roll songs – so now I will appropriate it for a message of Torah.

This week’s Parshah is Eikev, which, in the context of the opening verse, means “since” or “because.” It usually denotes a cause and effect relationship, such as, “Because you will observe God’s commandments, then blessings and physical rewards will descend upon you.” The great medieval commentator Rashi, however, uses an additional meaning of the word: “foot” or “heel.” He explains that there are commandments and values in Jewish life that the Jews sometimes take lightly. They grind them into the dust of everyday life by stepping upon them with their foot and/or heel. They tread on them. But these neglected commandments and values are actually the true key for spiritual success and a good life. So the choice of the word eikev is not merely literal. With the choice of that particular word, the Torah is teaching us the valuable lesson that there really are no small or inconsequential acts in life.Ethics of the Fathers teaches: “Be as careful with a minor commandment as with a major one, for you do not know the reward for the commandments.” In other words, we humans cannot understand the grand scheme of reward and punishment in the judgment of Heaven. For example, in the Book of Ruth, Boaz first offered another relative the chance to fulfill the commandment of marrying Ruth, but that man refused. He is therefore recorded as “Ploni Almoni,” the Hebrew equivalent of “Mr. Nobody.” He made light of that commandment and relinquished his chance to go down in history as the ancestor of King David and eventually, the Messiah himself. The Torah in effect teaches us to watch our step lest our heel unintentionally treads upon a holy commandment or value.

Every day, each of us is faced with decisions regarding our priorities of behavior and action. For example, one day while I am in synagogue, attempting to muster some semblance of devotion in my recitation of the prayers, a poor man shoves his hands in front of my face demanding that I give him some money. What should I do? Ignore the poor man and attempt to regain concentration on my prayer or abandon it for a moment and give him a coin? Which value should I tread upon with my heel?

When faced with one of these dilemmas, if we can balance our priorities without subjecting any of them to be dirt under our heels, we can accomplish great things. Boaz knew he was fulfilling a commandment by marrying Ruth, but he did know he was performing an act of historic proportion. He did not even live to see the child of that marriage, and we, too, do not necessarily get to see the positive results of our actions. But that is no reason to think they don’t matter. The recognition that we may never categorize God’s commandments as important and less important is a great step toward true spirituality and an understanding of Judaism.