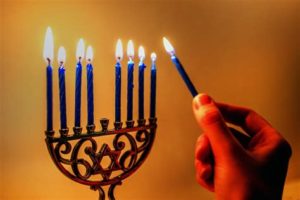 Jews the world over will celebrate the holiday of Chanuka this month. Chanuka is a difficult holiday to define. It is of rabbinic origin commemorating the victory of the Hasmoneans over their Syrian/Greek oppressors and the rededication of the holy Temple in Jerusalem to monotheistic worship. The great candelabra in the Temple was relit with pure undefiled oil and the light emanated from it for a miraculously long eight days. Hence the eight days of the Chanuka holiday.

Because Chanuka conveys a military as well as a spiritual message it does not fit comfortably into any of the holiday niches of Judaism. There is no other holiday on the Jewish calendar devoted to military victory. There is no special day of commemoration for the military triumphs of Joshua, Saul, or David, magnificent as they may have been. And if you will raise the issue that those biblically recorded triumphs were not really permanent then neither was the victory of the Hasmoneans and even the Temple itself was destroyed only a few centuries later. What therefore made this military victory so special and different as to warrant an eternal holiday of commemoration on its behalf?

Jewish holidays do not usually commemorate the spilling of blood, even the blood of our enemies. On the latter days of Pesach only the abridged Hallel is recited instead of the full-throated and longer version, since so many human beings – Egyptians all – perished in the Red Sea miracle. Why the sensitivity towards the Egyptian dead and not towards the Syrian/Greek dead? Why the full Hallel recited on Chanuka and not on the latter days of Pesach?

To our rescue in this matter comes the other ritual aspect of Chanuka, the commemoration of the lighting of the candelabra in the Temple and its accompanying of the long burning flask of pure oil. It is this aspect of Chanuka that comes to dominate the holiday though the military victory is recorded as part of the special prayers of the holiday. The military victory though also miraculous in terms of the odds against its success was manufactured and wrought by humans – by human courage, sacrifice, tenacity, strategy, and tactics.

Everything created by humans is subject to reversal, destruction, decay, and abandonment. Military victory in the long run of history, is temporary at best and futile at worst. All of the great pantheon of famous warriors of the distant past and of the near present as well testify to this disappointing truth, there are only temporary victors in wars; rarely if ever is there any true permanence to these triumphs. Only when the military victory is itself combined and even sublimated to spiritual accomplishment, only when God is acknowledged as having somehow fashioned the victory, only when there is symbolic religious ritual attached to the celebration of physical triumph, only then can that victory be seen as having some sense of permanence.

The memory of the victory of the Hasmoneans is glorified because of the candles of Chanuka. It is possibly a greater victory, so to speak, than the drowning of the Egyptians which required no Jewish sacrifice to bring it about nor is there any special ritual commandment associated with it. In such a situation our triumph cannot ride roughshod over human sensitivities and empathy, even towards enemies. However, Chanuka with its spiritually uplifting message of eternal fuel and lights allows us to exult fully in the military victory of the Hasmoneans as well. For it is no longer just a triumph of arms and war but rather one of the human spirit of Divine aid and continuing guidance.

Over the ages, Jews have embellished Chanuka with various customs and folkways. Jewish art and creativity have flourished in fashioning Chanuka candle holders. They range from the exotic and precious to the mundane and primitive. The exhibit of Chanuka menorot at the Israel Museum in Jerusalem is one that I never tire of visiting and studying. Special Chanuka foods are legendary, mostly based upon some connection of being baked, roasted, or cooked in oil. Doughnuts, potato pancakes, dairy delicacies etc. are all the order of the day. Commemoration always requires some sort of form and ritual. It can never stand alone and hope somehow to be truly remembered.

Many of the great days of the State of Israel’s past sixty years of triumphal memory are slowly receding from public view and observance because there is no ritual of religious observance present to seal them into the hearts and souls of the vast public. Ceremony and tradition are the powerful memory aids of human society. Without their presence everything is in danger of being lost in the haze of the past, no matter how great and meaningful the triumph may have been at the time of its occurrence. It is the small flickering lights of Chanuka that keep the victories and achievements and heroism of the Hasmoneans alive for us today. So let us rejoice in our Chanuka holiday and attempt to always keep the spirit of the original Hasmoneans alive and well within us for all our generations.

The Pursuit of Bad Through Good Means

How Many Arabs In Pre-Zionist Palestine?