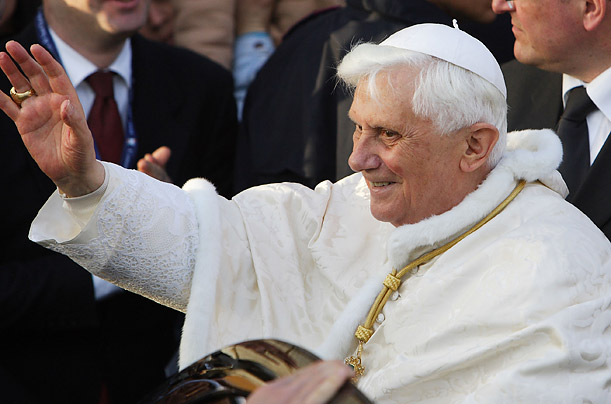 In a book to be published March 10, Pope Benedict XVI writes that the Jews are not responsible for the death of Jesus. Sadly, he is about 1,500 years too late. In that time, many Jews suffered and died from this doctrine. Here is a brief review of a related church doctrine that caused untold suffering to Jews.

In the writings of the early Church Fathers one can see how the Church was bothered by a number of theological problems regarding the Jews.

Already by the year 400, it began to be perplexing to the Christian world why the Jews survived. After all, it had already been 330 years since the Temple in Jerusalem had been destroyed. It was already more than centuries since the Jewish people had been driven from their homeland. They were, if not despised, at least not liked in the rest of the world. Historically, no nation could survive those blows and remain alive as an entity. It would assimilate and disappear. The Romans were able to swallow up hundreds and hundreds of small nations, tribes, societies and cultures. They are not even remembered any longer. In Greece alone there were over 65 different city-states, and they are all like they never existed.

Yet, here the persecuted, scattered Jewish people somehow showed no signs of giving up. The problem for Christianity was: Why?

The problem was compounded if you said – as the Church said – that the Jewish people were intrinsically evil and had done the greatest wrong in the history of civilization by rejected Jesus. This was compounded even more when the Church came to the doctrine of deicide. Only in our time, through Vatican II, has the Church officially withdrawn that concept. Of course, when a concept has been floating around for 1,500 years it does not die very easily. The canard that Jews are Christ-killers reverberates in the world today yet.

In any event, the problem for the Church theologians was that if the Jews are guilty of all that, what are they still doing here?

In response, the Church developed the notion of the Witness People.

The early Christians believed firmly that Jesus was coming back very soon. One can see in the writings of the early Christian fathers that they were very “other-worldly.” They said, in effect, that there was no use doing anything in the world. In fact, this is part of the idea that contributed to the Dark Ages. What is the use of building great cities or culture if tomorrow the Kingdom of God will be here? God does not need another skyscraper. The idea that the Second Coming was imminent served as a brake on any sort of progress in civilization.

Therefore, they postulated, when the Second Coming would occur – imminently – there had to be someone to get up and say in effect, “We were wrong.” Who was the logical candidate for that task, they reasoned? The people of Israel.

From the notion of the Witness People there arose during the Middle Ages (about the 12th century) the idea of the “Pope’s Jews.” The head of the Roman Catholic Church kept a number of Jews in Rome under his personal protection. All the other Jews in the world were expendable. However, he had to keep a certain amount to be sure that there would be Jews around to witness the Second Coming.

The “Pope’s Jews” existed literally until the Second World War. Indeed, the only time Pope Pius XII protested to the Gestapo and Nazis about the deportation and extermination of Jews was when they came to take Rome’s 7,000 Jews, which including “his” Jews.

Since the introduction of the Witness People doctrine, many centuries have passed and the Church has undergone a great deal of change, as has Western civilization. The faith of Western man in many things has been shaken. Even in the most religious and pious of Catholic circles today there is very little reference to the Second Coming. The Protestant fundamentalists still espouse it. But, one does not hear the Pope proclaim it. The cardinals and bishops do not talk about it. It has been put on the back burner, so to speak.

For that very reason, the idea of the Witness People has become harder and harder to “sell.” The longer it takes, the less sense it makes.

Nonetheless, the Witness People was and is a basic tenet of Christianity that the Church found necessary in order to explain Jewish survival and existence.