The most difficult topic certainly in modern Jewish history, if not in all of Jewish history, is the Holocaust. Merely to relate the dry facts cannot in any way do it justice. The questions it raises are so enormous that they defy any meaningful answer, and to a certain extent, we demean the entire subject if we try to give pat answers. On the other hand, it is not a subject that can be ignored. One cannot appreciate the impact of the last seventy years of Jewish life without an understanding of the Holocaust. And since today is Yom Ha’shoah, Holocaust Memorial Day, let us try to delve into it a little.

Hitler and the Nazis were obsessed by the racial theory that all the troubles in the world stemmed from the Jewish people and that the solution to the world’s problems lay in their destruction. By the destruction of the Jewish people, they did not mean assimilation. They meant extermination. And they set about accomplishing it in a fashion unknown in the history of the world until then. The Holocaust remains a grisly monument to the bestial character of man.

The Nazis were meticulous in their “work.” They left over so many records that the Holocaust became the most documented genocide in the history of the world. In contrast, the Turks killed approximately a million and a half Armenians between 1919 and 1923, but it is not documented because the Turks did not keep records. We don’t have records of how many Native Americans were destroyed by the American settlers. But the Nazis kept records, and we have them. As an example, by December 1941, they recorded that 54,696 Jews were killed by the einsatzgruppen, mobile commando units whose specific job was to kill Jews in mass shootings. We’re not talking approximations here. 54,696. [1]

The Nazis didn’t just kill the Jews; they made use of every inch of them. Women’s hair was shaved off and weaved into blankets for Nazi soldiers. Fat from Jews’ bodies was used to make soap. Gold teeth were pulled out to make gold bars for the Reichsbank. 384,000 pairs of men’s shoes were sent to Germany from Auschwitz. 646,000 men’s suits. 184,000 pairs of eyeglasses.[2] 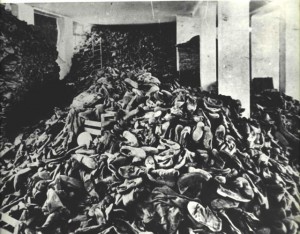 In my opinion, the most frightening thing in Auschwitz is not the gas chambers or the crematoria. It’s a room piled to the ceiling with children’s shoes. That gives you have an idea what the Holocaust was. Shoes. Once worn by real people.

A particularly fiendish part of all this is that the Jews were made to pay for it. When many a Jewish man was taken to the forced labor camps, his wife or mother would later receive a postcard from the German government saying that unfortunately her husband or son died – always of a heart attack – and if she would send the German Postal Authorities three and a half deutsche marks, they’d mail her the ashes.

The amount of cruelty that it takes to do that is a measure of the type of system that was installed here. It’s one thing to kill, but to kill sadistically. Here is a quote taken from Hausner’s account of the Eichmann’s trial:

“The deportations were coupled with the most cruel tortures to extract money and valuables. Wives were beaten before husbands, children before parents to make them ‘confess’ where their jewelry was hidden. Rubber truncheons, electric current, flogging of soles and palms, sticking needles under the nails were favorite devices of the Hungarian police, under the general direction of Krumey and Wisliceny. . . An 84-year-old mother of a distinguished citizen had been taken from the operating table while having her foot amputated for diabetes and thrown straight into the boxcar. This maltreatment so embittered her son that he whipped out a revolver to shoot himself. The weapon was knocked aside, but it fired anyway and blew off half his face. He also was thrown into the boxcar, unbandaged, after his mother.”[3]

This system was based upon the fact that the Jews could be transported all over Europe by rail transport. It’s just mind-boggling that in the midst of a war that Germany was losing, when transportation of materials and men and the entire infrastructure of the war depended upon good rail connections, the Nazis thought nothing of diverting a great number of locomotives, freight cars, and railway lines to feed places like Auschwitz day in and day out. And it’s equally mind-boggling that the rail lines that brought people to Auschwitz were the only ones the Allies did not bomb during the entire war.

There’s no end to the stories that can be told, and each one is a picture of what happened. I don’t want to go into reasons. As I mentioned at the beginning, attempts to find reasons demean the subject overall. But the fact is, the Holocaust occurred. It is part of our history, and therefore, we have to know it.

The casualties are enormous. Whole generations are missing within the Jewish world. Nevertheless, we persevere. The Holocaust will always haunt us, but our determination to survive and be the Jewish people is really our answer to it. That is what in the end will frustrate all the deniers, and we will be privileged to happier and stronger days.

For more on the Holocaust and it’s aftermath, please see our film Faith and Fate 6: The Miracle of Israel, 1945-1948.

Who Gets the Last Word?