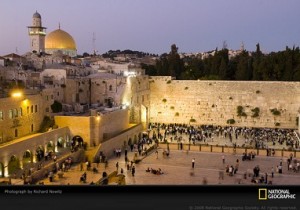 On November 23, 2010, AP reported on, “an official Palestinian report claiming that… Jerusalem’s Western Wall has no religious significance to Jews…. The report concludes that since Jews have no claim to the area, it is holy Muslim territory and must be part of Palestinian Jerusalem.”

The Jewish people have had long experience with deniers and denials.

The pagan world denied the validity of the Jewish ideas of monotheism and morality. The Romans denied that the Jews had a God at all since there was no “evidence” of His presence, while the presence of the Roman gods was indisputable in their existing imagery and statuary.

The Christian world claimed that the covenant of God with Israel, which they acknowledged to have once been true and is in fact the basis of all Christian theology, was somehow cancelled by the coming of Christianity and that that covenant was transferred now to the Church.

I have already written a number of times about the inexplicable phenomenon of the Holocaust deniers. No pictures, eyewitness accounts, documents or other proofs will sway these anti-Semites. The Holocaust just never happened. The Nazi theory of propaganda that the “big lie” repeated often enough eventually becomes believable and believed is at work here.

The oft-repeated “big lie” when coupled with pathological hatred and systematic denial is truly a most lethal weapon.

The Mufti of Jerusalem, handpicked by Arafat undoubtedly due to his religious leadership qualities and loving spirituality, is a doozy of a denier.

He denies that there ever were any Jewish Temples on the Temple Mount, a statement that undermines all of Christian belief as well. He also denies that the Western Wall has any particular significance, religious or historical, to Jews or to anyone else. It is only a wall that somehow helps support the Al-Aqsa Mosque. Of course, the fact that the wall predates the mosque by seven centuries is also conveniently denied. And in any event, the Mufti claims that the Western Wall and the entire Temple Mount belong exclusively and in perpetuity to the Moslem Waqf that operates the mosques on the Temple Mount. He also denies that there was ever any significant Jewish presence in the Land of Israel until this past century. And to back up his denials, the Waqf is systematically and permanently destroying any physical or archeological evidence of ancient Jewish presence on the Temple Mount.

Of course, the Palestinian Authority generally is very big on denials. After one of its heroic snipers blew off the head of ten month old Shalhevet Pas in Chevron, the Information Minister of the Authority stated that the infant was born badly handicapped and therefore probably was killed by her own mother. It also denies that the Tomb of Rachel, the Cave of the Patriarchs or Joseph’s Tomb have any specific relationship to the Jewish people. And to top it all off, the Palestinians refuse to see that they and their violence and terror are somehow part of the problem and not of the solution to the instability and tragedies of the Middle East. The Palestinian denial of history and reality, prodigious as it is, naturally produces equally prodigious frustration and violence on their part. Treating this deep denial seems to me to be a necessary prerequisite to any sort of meaningful settlement of the Arab-Israeli struggle.

In a perverted way, we old-fashioned Jews owe a debt of gratitude to all of these deniers. The deniers make us aware of what we truly represent and what our core beliefs are. Without the deniers perhaps there would be no serious assessment of ourselves and our place in the world. The deniers are the ones who strip us of our fantasies and illusions and allow us to see things in reality, however painful and unpleasant that reality may be.

The Palestinians and the Mufti have stiffened the backbone of Israel by their denial of our rights and our lives in a fashion that no Israeli leader could have done. David Irving has been a catalyst for even more Holocaust studies, programs and memories. The Exodus deniers only make the Seder night and the holiday of Pesach dearer than ever to us. It is the spectacle of the deniers and their self-inflicted angst that makes it easier for us ordinary folk to continue to believe.